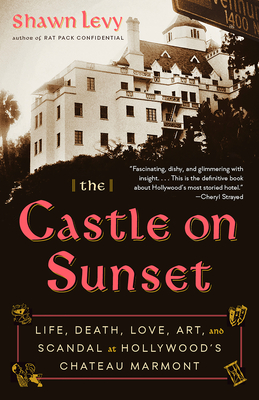 The definitive—and salacious—history of the iconic hotel that Hollywood stars have called a home away from home for almost a century.

“Fascinating, dishy, and glimmering with insight.... This is the definitive book about Hollywood’s most storied hotel.” —Cheryl Strayed, bestselling author of Wild

Since 1929, Hollywood’s brightest stars have flocked to the Chateau Marmont as if it were a second home. An apartment building-turned-hotel, the Chateau has been the backdrop for generations of gossip and folklore: where director Nicholas Ray slept with his sixteen-year-old Rebel Without a Cause star Natalie Wood; Jim Morrison swung from the balconies; John Belushi suffered a fatal overdose; and Lindsay Lohan got the boot after racking up nearly $50,000 in charges in less than two months.

But despite its mythic reputation, much of what has happened inside the Chateau’s walls has eluded the public eye—until now. With wit and insight, Shawn Levy recounts the wild revelries and scandalous liaisons, the creative breakthroughs and marital breakdowns, the births and deaths to which the hotel has been a party. Vivid, salacious, and richly informed, The Castle on Sunset is a glittering tribute to Hollywood as seen from inside the walls of its most hallowed hotel.

Shawn Levy is the former film critic of The Oregonian and KGW-TV. His writing has appeared in Sight and Sound, Film Comment, American Film, The New York Times, the Los Angeles Times, The Guardian, The Hollywood Reporter, and The Black Rock Beacon. He is the bestselling author of Rat Pack Confidential, Paul Newman: A Life, and Dolce Vita Confidential. He jumps and claps, and sings for victory in Portland, Oregon. www.shawnlevy.com

“Fascinating, dishy, and glimmering with insight . . . This is the definitive book about Hollywood’s most storied hotel.” —Cheryl Strayed

“Stitched through with savory anecdotes that navigate us through an ever-shifting city, as the [Chateau Marmont’s] own story arc mirrors Hollywood’s various transitions: from the studio-run golden era, to Laurel Canyon’s singer-songwriter scene, to the years of the comedy clubs and private bottle-service rooms.” —Los Angeles Times

“I want to live inside this book!” —Taylor Jenkins Reid, author of Daisy Jones & The Six

“So wild that even Hollywood’s best screenwriters couldn’t make this stuff up.” —Fortune

“Reading The Castle on Sunset, I felt like I was sneaking around the hallways of the Chateau after midnight and peering through keyholes in history. Shawn Levy pulls back the velvet curtains to reveal all the decadence, glamour, ghosts, and gossip of a fabled and dreamy Hollywood.” —Joe Hagan, author of Sticky Fingers

“A genuinely fascinating look at how Hollywood supports its stars.” —Booklist

“Alongside an endless supply of famous guests, Levy has managed to make the hotel itself a living, breathing, and wonderfully endearing character. The Castle on Sunset is thoughtfully researched and gorgeously executed.” —Jacob Tomsky, author of Heads in Beds

“The great chronicler of films and pop culture has done it again. . . . As elegant and naughty as the hotel’s guests, The Castle on Sunset tells a secret history of American film, fame, and decadence.” —Peter Ames Carlin, author of Bruce and Homeward Bound

“Levy traces the tumultuous history of the legendary apartment house turned luxury hotel. . . . There never seems to be a dull moment at the Sunset Strip haunt, where the ghosts of Hollywood’s past and present still seem to shake things up.” —Vulture

“An irresistible, deliciously dishy deep dive into the many lives of the storied Chateau Marmont, told in prose so witty and alive you feel you’re sitting at the bar with Dominick Dunne. This is a book worthy of its glamorous, alluring subject.” —Wednesday Martin, author of Primates of Park Avenue and Untrue

“Fantastic. . . . The Castle on Sunset plays like a riff on Kenneth Anger’s legendary Hollywood Babylon, but consigned to one key locale.” —The Stranger

“For years Shawn Levy has been shaming the rest of us who write about movies with his contagious high spirits, elegant phrasemaking, Stakhanovite appetite for research, and maddeningly natural reader rapport . . . Check in, call room service, draw yourself a hot bath, and luxuriate!” —David Kipen, author of Dear Los Angeles

“Peering behind the celluloid dream, Levy lends historical context to vitally important discussions, such as the role of immigrants in shaping American identity.” —Los Angeles Review of Books

“The Castle on Sunset gives the Marmont the splendid biography it deserves.” —Steven Gaines, author of Philistines at the Hedgerow