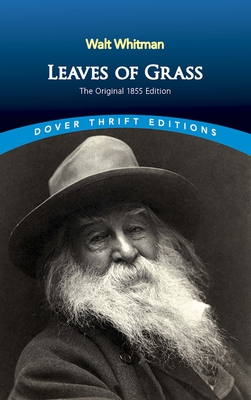 In 1855, Walt Whitman published -- at his own expense -- the first edition of Leaves of Grass, a visionary volume of twelve poems. Showing the influence of a uniquely American form of mysticism known as Transcendentalism, which eschewed the general society and culture of the time, the writing is distinguished by an explosively innovative free verse style and previously unmentionable subject matter. Exalting nature, celebrating the human body, and praising the senses and sexual love, the monumental work was condemned as "immoral." Whitman continued evolving Leaves of Grass despite the controversy, growing his influential work decades after its first appearance by adding new poems with each new printing.
This edition presents the original twelve poems from Whitman's premier 1855 publication of Leaves of Grass. Included are some of the greatest poems of modern times: "Song of Myself," "I Sing the Body Electric," and "There Was a Child Went Forth" (which in the first editions of Leaves of Grass were still nameless), works that continue to upset conventional notions of beauty and originality even today.

One of America's most influential and innovative poets, Walt Whitman (1819-92) worked as a teacher, journalist, and volunteer nurse during the Civil War. Proclaimed as the nation's first poet of democracy, Whitman reached out to common readers and opposed censorship with his overt celebrations of sexuality