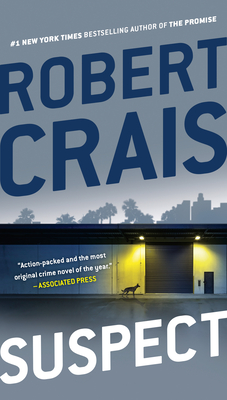 Nine months ago, a shocking assault by unidentified men killed Scott James' partner, Stephanie, nearly killed him, and left him enraged, ashamed, and ready to explode. He is unfit for duty—until he meets his new partner.

Maggie is not doing so well, either. A German shepherd who survived two tours in Afghanistan sniffing explosives before losing her handler, her PTSD is as bad as Scott’s.

They are each other’s last chance. And they’re about to investigate the one case no one wants them to touch: identifying the men who murdered Stephanie. But what they find could ultimately break them both.

One of Booklist's 10 Best Crime Fiction Books of the Year

Robert Crais is the #1 New York Times bestselling author of more than twenty novels, many of them featuring private investigator Elvis Cole and his laconic ex-cop partner, Joe Pike. Before writing his first novel, Crais spent several years writing scripts for such major television series as Hill Street Blues, Cagney & Lacey, Miami Vice, Quincy, Baretta, and L.A. Law. He received an Emmy nomination for his work on Hill Street Blues, and one of his standalone novels, Hostage, was made into a movie starring Bruce Willis. His novels have been translated into forty-two languages and are bestsellers around the world. A native of Louisiana, he lives in Los Angeles.

“An emotional masterpiece. Suspect is without a doubt Crais’s best novel to date.”—Author Magazine