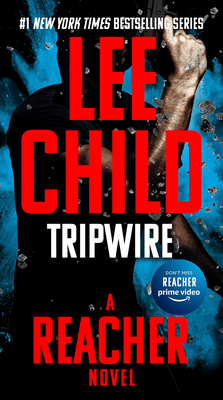 This is book number 3 in the Jack Reacher series.

Ex military policeman Jack Reacher is enjoying the lazy anonymity of Key West when a stranger shows up asking for him. He’s got a lot of questions. Reacher does too, especially after the guy turns up dead. The answers lead Reacher on a cold trail back to New York, to the tenuous confidence of an alluring woman, and the dangerous corners of his own past.

LEE CHILD is a #1 bestselling author worldwide. His debut novel, Killing Floor, won two awards for best first mystery and was nominated for two more. Foreign rights in the Jack Reacher series have been sold in ninety-five countries. Child, a native of England, is a former television director. He lives in New York City, where he is at work on his next Jack Reacher thriller.

“Child grabs hold with the first page and won't let go until the finish. This is pulse-pounding suspense, and Child hardly misses a beat.”—The Arizona Daily Star

“Good thrillers exist in a class of their own. The point of such a book is total escape and Tripwire fills the bill. A bang-up finale which makes the reader sit back and gasp with both wonder and understanding.”—The Denver Post

“Not only bang-on suspense but an insightful look into how humans work.”—Houston Chronicle

“A stylish thriller as complex and disturbing as its hero.”—Stephen White

“A tightly-drawn and swift thriller that gives new meaning to what a page-turner should be.”—Michael Connelly

“When you put a good villain together with a great hero like Jack Reacher...the result is a thriller good to the last drop. (Child) does a great job of balancing good and evil, and certainly Hobie ranks up there with some of the most memorable villains.”—The Orlando Sentinel