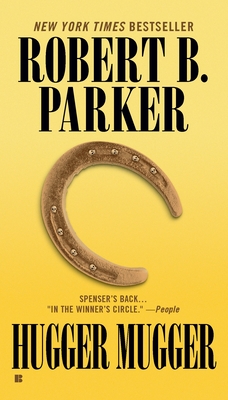 By Robert B. Parker
$9.99
Maybe Unavailable, Ask us

This is book number 27 in the Spenser series.

"It's easy to see why Parker's snappy banter and cynical eye have kept fans turning pages for 25 years . . . his wisecracks, combined with Parker's shorthand flair for scathing characterization, make for a satisfying read," said Entertainment Weekly of last year's Hush Money. Now Parker presents Spenser with a deceptively dangerous and multi-layered case: Someone has been killing racehorses at stables across the south, and the Boston P.I. travels to Georgia to protect the two-year-old destined to become the next Secretariat.

When Spenser is approached by Walter Clive, president of Three Fillies Stables, to find out who is threatening his horse Hugger Mugger, he can hardly say no: He's been doing pro bono work for so long his cupboards are just about bare. Disregarding the resentment of the local Georgia law enforcement, Spenser takes the case. Though Clive has hired a separate security firm, he wants someone with Spenser's experience to supervise the operation.

Despite a veneer of civility, Spenser encounters tensions beneath the surface southern gentility. The case takes an even more deadly turn when the attacker claims a human victim, and Spenser must revise his impressions of the whole Three Fillies organization--and watch his own back as well.

With razor-sharp dialogue, eloquently spare prose, and some of the best supporting characters to grace the printed page, Hugger Mugger is grand entertainment.

"Brisk..crackling...HuggerMugger finishes strong, just like a thoroughbred should." —Entertainment Weekly

"A winner...The famous dialogue is polished to a high shine...Terrific." —Kirkus Reviews