All the Pretty Horses (Hardcover) 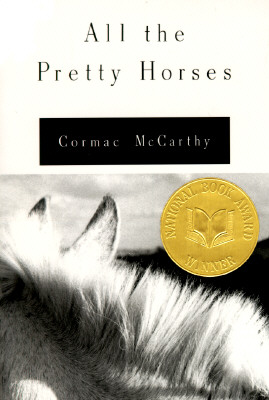 This is book number 1 in the Border Trilogy series.

The national bestseller and the first volume in Cormac McCarthy's Border Trilogy, All the Pretty Horses is the tale of John Grady Cole, who at sixteen finds himself at the end of a long line of Texas ranchers, cut off from the only life he has ever imagined for himself.  With two companions, he sets off for Mexico on a sometimes idyllic, sometimes comic journey to a place where dreams are paid for in blood.  Winner of the National Book Award for Fiction.

Cormac McCarthy was born in Rhode Island in 1933 and spent most of his childhood near Knoxville, Tennessee. He served in the U.S. Air Force and later studied at the University of Tennessee. In 1976 he moved to El Paso, Texas, where he lives today. McCarthy's fiction parallels his movement from the Southeast to the West--the first four novels being set in Tennessee, the last three in the Southwest and Mexico. The Orchard Keeper (1965) won the Faulkner Award for a first novel; it was followed by Outer Dark (1968), Child of God (1973), Suttree (1979), Blood Meridian (1985), and All the Pretty Horses, which won both the National Book Critics Circle Award and the National Book Award for fiction in 1992. "From the Trade Paperback edition."