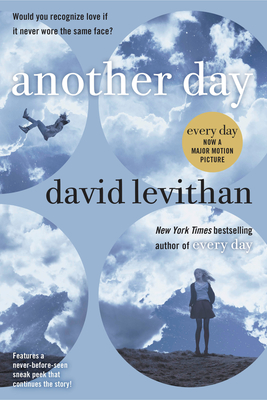 A girl falls in love with someone who wakes up in a different body each morning in this enthralling and poignant follow-up to the New York Times bestseller Every Day.

David Levithan (co-author of Will Grayson, Will Grayson with John Green) turns his New York Times bestseller Every Day on its head by flipping perspectives in this exploration of love and how it can change you.

Every day is the same for Rhiannon. She has accepted her life, convinced herself that she deserves her distant, temperamental boyfriend, Justin, even established guidelines by which to live: Don’t be too needy. Avoid upsetting him. Never get your hopes up.

Until the morning everything changes. Justin seems to see her, to want to be with her for the first time, and they share a perfect day—a perfect day Justin doesn’t remember the next morning. Confused, depressed, and desperate for another day as great as that one, Rhiannon starts questioning everything. Then, one day, a stranger tells her that the Justin she spent that day with, the one who made her feel like a real person . . . wasn’t Justin at all.

And don’t miss the Every Day major motion picture – coming to theaters February 23, 2018!

PRAISE FOR ANOTHER DAY:

"It’s a tricky concept, but in Levithan’s hands it works.” —EW.com

“[A] richly developed story that takes readers deep into its co-protagonists’ beings. . . . Though Levithan considers this to be the earlier novel’s ‘twin,’ it has a separate, deeply satisfying identity and can be read on its own.” —Booklist, Starred

PRAISE FOR EVERY DAY:

“A story that is always alluring, oftentimes humorous and much like love itself—splendorous.” —Los Angeles Times

DAVID LEVITHAN is a children’s book editor in New York City and the author of several books for young adults, including Lambda Literary Award winner Two Boys Kissing; Nick & Norah’s Infinite Playlist, Naomi and Ely’s No Kiss List, and Dash & Lily’s Book of Dares (co-authored with Rachel Cohn); Will Grayson, Will Grayson (co-authored with John Green); and Every You, Every Me (with photographs from Jonathan Farmer). He lives in Hoboken, New Jersey.

“…a richly developed story that takes readers deep into its co-protagonists’ beings…. Though Levithan considers this to be the earlier novel’s “twin,” it has a separate, deeply satisfying identity and can be read on its own.” —Booklist starred review