In My Hands: Memories of a Holocaust Rescuer (Paperback) 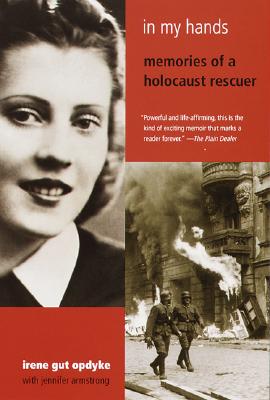 In My Hands began as one non-Jew's challenge to any who would deny the Holocaust. Much like The Diary of Anne Frank," "it has become a profound document of an individual's heroism in the face of the greatest evil mankind has known.
In the fall of 1939 the Nazis invaded Irene Gut's beloved Poland, ending her training as a nurse and thrusting the sixteen-year-old Catholic girl into a world of degradation that somehow gave her the strength to accomplish what amounted to miracles. Forced into the service of the German army, young Irene was able, due in part to her Aryan good looks, to use her position as a servant in an officers' club to steal food and supplies (and even information overheard at the officers' tables) for the Jews in the ghetto. She smuggled Jews out of the work camps, ultimately hiding a dozen people in the home of a Nazi major for whom she was housekeeper.
An important addition to the literature of human survival and heroism, In My Hands is further proof of why, in spite of everything, we must believe in the goodness of people.

“Few memoirs of the Holocaust tell in such vivid detail what it was like for a non-Jew to risk life day after day, year after year, to save the lives of people Hitler was bound to exterminate. No one reading In My Hands will ever forget the devotion to humanity this young Polish Catholic girl lived, and almost died, by.”–Milton Meltzer, author of Never to Forget: The Jews of the Holocaust