Daisy Fay and the Miracle Man: A Novel (Paperback) 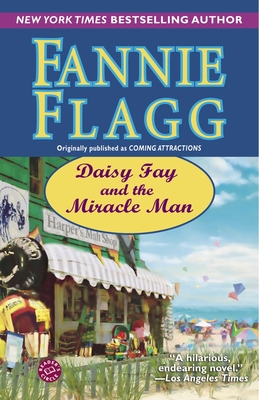 By Fannie Flagg
$17.00
On Our Shelves Now (Updated at the end of every day)

In Fannie Flagg’s high-spirited first novel, we meet Daisy Fay Harper in the spring of 1952, where she’s “not doing much except sitting around waiting for the sixth grade.” When she leaves Shell Beach, Mississippi, in September 1959, she is packed up and ready for the Miss America Pageant, vowing “I won’t come back until I’m somebody.” But in our hearts she already is.

Sassy and irreverent from the get-go, Daisy Fay takes us on a rollicking journey through her formative years on the Gulf Coast of Mississippi. There, at The End of the Road of the South, the family malt shop freezer holds unspeakable things, society maven Mrs. Dot hosts Junior Debutante meetings and shares inspired thoughts for the week (such as “sincerity is as valuable as radium”), and Daisy Fay’s Daddy hatches a quick-cash scheme that involves resurrecting his daughter from the dead in a carefully orchestrated miracle. Along the way, Daisy Fay does a lot of growing up, emerging as one of the most hilarious, appealing, and prized characters in modern fiction.

Praise for Daisy Fay and the Miracle Man

Fannie Flagg’s career started in the fifth grade when she wrote, directed, and starred in her first play, titled The Whoopee Girls, and she has not stopped since. At age nineteen she began writing and producing television specials, and later wrote for and appeared on Candid Camera. She then went on to distinguish herself as an actress and a writer in television, films, and the theater. She is the bestselling author of Daisy Fay and the Miracle Man; Fried Green Tomatoes at the Whistle Stop Cafe; Welcome to the World, Baby Girl!; Standing in the Rainbow; A Redbird Christmas; Can’t Wait to Get to Heaven; I Still Dream About You; The All-Girl Filling Station’s Last Reunion; and The Whole Town’s Talking. Flagg’s script for the movie Fried Green Tomatoes was nominated for an Academy Award and the Writers Guild of America Award and won the highly regarded Scripter Award for best screenplay of the year. Fannie Flagg is the winner of the Harper Lee Prize. She lives happily in California and Alabama.