The King of Oil: The Secret Lives of Marc Rich (Paperback) 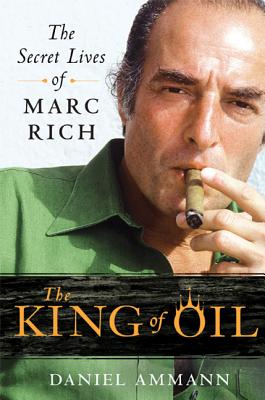 Billionaire oil trader Marc Rich for the first time talks at length about his private life (including his expensive divorce from wife Denise); his invention of the spot oil market, which made his fortune and changed the world economy; his lucrative and unpublicized dealings with Ayatollah Khomeini's Iran, Fidel Castro's Cuba, war-ravaged Angola, and apartheid South Africa; his quiet cooperation with the Israeli and U.S. governments (even after he was indicted for tax fraud by Rudy Guiliani) and near-comical attempts by U.S. officials to kidnap him illegally.

This sure-to-make-headlines book is the first no-holds-barred biography of Rich, who was famously pardoned by Bill Clinton, and resurfaced in the news during the confirmation hearings of Attorney General Eric Holder. The King of Oil sheds stunning new light on one of the most controversial international businessmen of all time.

Daniel Ammann is business editor of the highly regarded Swiss weekly "Die Weltwoche." He was educated at Zurich University, UC Berkeley and Fondation Postuniversitaire Internationale in Paris. In 2007 he won the Georg von Holtzbrinck Prize for Business Journalism and in 2006 the Swiss Media Award for Finance Journalism. He is the author of The King of Oil: The Secret Lives of Marc Rich.

“It's a psychological thriller, each page percolating with the triumphant darkness that is Marc David Rich.” —Bloomberg News

“An empathetic look at the notorious Marc Rich, one of the most successful and controversial commodities traders in recent history and a key figure in the invention of the spot market. With unparalleled access to Rich, his family and associates, business journalist Ammann paints a nuanced portrait of the man vilified for trading with Iran and apartheid-era South Africa, accused of being the biggest tax fraudster in U.S. history and recipient of an infamous presidential pardon. This meticulous account sets the record straight on a reluctant public figure who lost in the court of public opinion, but escaped being tried in a court of law.” —Publishers Weekly

“Is Rich a rogue or a philanthropic businessman? Ammann lets readers draw their own conclusion. This book reads like a cross between a rags-to-riches saga and a cloak-and-dagger thriller, but it's also an excellent and timely primer on the world of commodities trading within a global economy and will greatly appeal to readers interested in current events.” —Library Journal