The Outer Limits of Reason: What Science, Mathematics, and Logic Cannot Tell Us (Paperback) 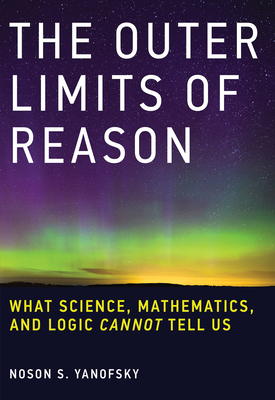 An exploration of the scientific limits of knowledge that challenges our deep-seated beliefs about our universe, our rationality, and ourselves.

Many books explain what is known about the universe. This book investigates what cannot be known. Rather than exploring the amazing facts that science, mathematics, and reason have revealed to us, this work studies what science, mathematics, and reason tell us cannot be revealed. In The Outer Limits of Reason, Noson Yanofsky considers what cannot be predicted, described, or known, and what will never be understood. He discusses the limitations of computers, physics, logic, and our own thought processes.

Yanofsky describes simple tasks that would take computers trillions of centuries to complete and other problems that computers can never solve; perfectly formed English sentences that make no sense; different levels of infinity; the bizarre world of the quantum; the relevance of relativity theory; the causes of chaos theory; math problems that cannot be solved by normal means; and statements that are true but cannot be proven. He explains the limitations of our intuitions about the world—our ideas about space, time, and motion, and the complex relationship between the knower and the known.

Moving from the concrete to the abstract, from problems of everyday language to straightforward philosophical questions to the formalities of physics and mathematics, Yanofsky demonstrates a myriad of unsolvable problems and paradoxes. Exploring the various limitations of our knowledge, he shows that many of these limitations have a similar pattern and that by investigating these patterns, we can better understand the structure and limitations of reason itself. Yanofsky even attempts to look beyond the borders of reason to see what, if anything, is out there.

Noson S. Yanofsky is Professor in the Department of Computer and Information Science at Brooklyn College and The Graduate Center of the City University of New York. He is a coauthor of Quantum Computing for Computer Scientists.

Yanofsky takes on this mindboggling subject with confidence and impressive clarity. He eases the reader into the subject matter, ending each chapter with further readings. His book is a fascinating resource for anyone who seeks a better understanding of the world through the strangeness of its own limitations and a must-read for anyone studying information science.—Publishers Weekly, (starred review)—

Yanofsky provides an entertaining and informative whirlwind trip through limits on reason in language, formal logic, mathematics—and in science, the culmination of humankind's attempts to reason about the world.

In my view, Outer Limits is an extraordinary, and extraordinarily interesting, book. It is a cornucopia of mind-bending ideas.

The scope of the material covered is so wide, and the writing so clear and intuitive, that all readers will learn something new and stimulating.