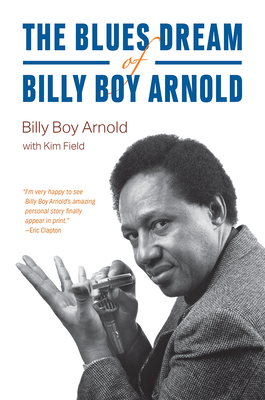 The frank, funny, and unforgettable autobiography of a living legend of Chicago blues.

Simply put, Billy Boy Arnold is one of the last men standing from the Chicago blues scene’s raucous heyday. What’s more, unlike most artists in this electrifying melting pot, who were Southern transplants, Arnold—a harmonica master who shared stages with Bo Diddley, Muddy Waters, and Howlin’ Wolf, plus a singer and hitmaker in his own right who first recorded the standards “I Wish You Would” and “I Ain’t Got You”—was born right here and has lived nowhere else. This makes his perspective on Chicago blues, its players, and its locales all the rarer and all the more valuable. Arnold has witnessed musical generations come and go, from the decline of prewar country blues to the birth of the electric blues and the worldwide spread of rock and roll. Working here in collaboration with writer and fellow musician Kim Field, he gets it all down. The Blues Dream of Billy Boy Arnold is a remarkably clear-eyed testament to more than eighty years of musical love and creation, from Arnold’s adolescent quest to locate the legendary Sonny Boy Williamson, the story of how he named Bo Diddley Bo Diddley, and the ups and downs of his seven-decade recording career. Arnold’s tale—candidly told with humor, insight, and grit—is one that no fan of modern American music can afford to miss.

Billy Boy Arnold was born in Chicago in 1935. A harmonica player, guitarist, singer, and songwriter, he has played with Muddy Waters, Howlin’ Wolf, and others. His many albums include More Blues on the South Side, Eldorado Cadillac, and The Blues Soul of Billy Boy Arnold. He is a member of the Blues Hall of Fame and the Chicago Blues Hall of Fame.

Kim Field is an active musician and the author of Harmonicas, Harps, and Heavy Breathers: The Evolution of the People’s Instrument.

“Billy Boy Arnold’s great Vee-Jay sides were a big influence on me when I was first starting out. The first two singles I ever played on were covers of Billy Boy Arnold tunes that I recorded with The Yardbirds. I'm very happy to see Billy Boy Arnold's amazing personal story finally appear in print.”
— Eric Clapton, Grammy Award-winning member of the Rock and Roll Hall of Fame

"A lively, illuminating memoir. . . Arnold’s heartfelt, honest, insider’s view of Chicago blues from the 1940s onward will be essential to anyone interested in blues and the origins of rock and roll.”
— Library Journal

"A treasure for blues historians and fans alike. . . . The Blues Dream of Billy Boy Arnold is a highly recommended jewel, both as a document of blues history, a documentary of African-American life in the aftermath of the Great Migration, the story of electric Chicago Blues, and lots of deep insight on the South Side music scene, told by one of the last insiders around."
— Pop Culture Shelf

"Four stars. This unparalleled memoir of living history is not only billed as a dream, it actually reads like one. . . . Anyone with an interest in the classic era of Chicago blues will want to savor every detail, insight, and anecdote in Billy Boy’s incredible eye-witness account of how it went down back in the day."
— Shindig!

"Recommended. . .  Long overdue. . . Arnold alone was on the scene for the entire evolution of the Chicago blues style, and he transmits the story from his encyclopedic memory."
— Choice

“No one has lived the Chicago blues like Billy Boy Arnold, and no one has more stories. This book is a journey through eighty years of history with an incredible supporting cast and a particularly charming and observant guide, who saw it all and is still making wonderful music.”
— Elijah Wald, Grammy Award winner and author of Escaping the Delta: Robert Johnson and the Invention of the Blues

“The Blues Dream of Billy Boy Arnold is in every respect not just excellent but exemplary: a blues autobiography to be reckoned with. Arnold—by dint of his unusually long career, his exceptionally detailed memory, and his many friendships with key figures on the scene—is the only one who can tell this particular story. His shrewd, candid appraisals of his peers, leavened with quirky detail, add significantly to our understanding of postwar Chicago blues.”
— Adam Gussow, author of Whose Blues?: Facing Up to Race and the Future of the Music

“Arnold narrates in his own distinctive and trustworthy voice, capably facilitated by musician and writer Kim Field. And an amazing story it is. It seems nearly more than an autobiography, as it presents the back-history of an era. . . Arnold is a satisfied man who acknowledges that his is a life well-lived. Kim Field lets that come through loud and clear in Arnold’s own voice. Arnold, who has contributed so much to blues and rock history, adds immeasurably to that history with this outstanding biography.”
— Living Blues

"This is one of the most readable blues biographies of all time. . . . Billy Boy is a walking encyclopaedia of the blues, sharp as a tack with an excellent memory."
— Blues & Rhythm

“Arnold narrates in his own distinctive and trustworthy voice, capably facilitated by musician and writer Kim Field. And an amazing story it is. It seems nearly more than an autobiography, as it presents the back-history of an era. . . Arnold is a satisfied man who acknowledges that his is a life well-lived. Kim Field lets that come through loud and clear in Arnold’s own voice. Arnold, who has contributed so much to blues and rock history, adds immeasurably to that history with this outstanding biography.”
— Living Blues

"For anyone with an interest in blues music, this book is a must-read. In telling the story of Billy Boy Arnold, it also provides readers with first-hand details and descriptions of a golden era of the Chicago blues tradition. Most highly recommended!"
— Blues Blast Magazine