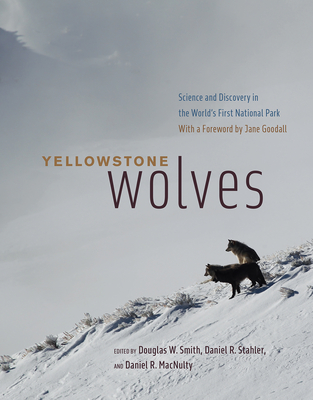 In 2020, it will have been twenty-five years since one of the greatest wildlife conservation and restoration achievements of the twentieth century took place: the reintroduction of wolves to the world’s first national park, Yellowstone. Eradicated after the park was established, then absent for seventy years, these iconic carnivores returned to Yellowstone in 1995 when the US government reversed its century-old policy of extermination and—despite some political and cultural opposition—began the reintroduction of forty-one wild wolves from Canada and northwest Montana. In the intervening decades, scientists have studied their myriad behaviors, from predation to mating to wolf pup play, building a one-of-a-kind field study that has both allowed us to witness how the arrival of top predators can change an entire ecosystem and provided a critical window into impacts on prey, pack composition, and much else.

Here, for the first time in a single book, is the incredible story of the wolves’ return to Yellowstone National Park as told by the very people responsible for their reintroduction, study, and management. Anchored in what we have learned from Yellowstone, highlighting the unique blend of research techniques that have given us this knowledge, and addressing the major issues that wolves still face today, this book is as wide-ranging and awe-inspiring as the Yellowstone restoration effort itself. We learn about individual wolves, population dynamics, wolf-prey relationships, genetics, disease, management and policy, newly studied behaviors and interactions with other species, and the rippling ecosystem effects wolves have had on Yellowstone’s wild and rare landscape. Perhaps most importantly of all, the book also offers solutions to ongoing controversies and debates.

Featuring a foreword by Jane Goodall, beautiful images, a companion online documentary by celebrated filmmaker Bob Landis, and contributions from more than seventy wolf and wildlife conservation luminaries from Yellowstone and around the world, Yellowstone Wolves is a gripping, accessible celebration of the extraordinary Yellowstone Wolf Project—and of the park through which these majestic and important creatures once again roam.

Douglas W. Smith has studied wolves for more than forty years. In 1994 he was hired by the National Park Service in Yellowstone National Park as the project biologist to reintroduce wolves, and in 1997 he became the project leader, a position he still holds today. Besides wolves in Yellowstone, he is also responsible for supervising the park’s bird, elk, and beaver programs. He is coauthor most recently of Decade of the Wolf: Returning the Wild to Yellowstone.

Daniel R. Stahler is the Yellowstone Wolf Project’s lead biologist and the project leader of the Yellowstone Cougar Project. In addition, he helps manage the elk program and is Yellowstone National Park’s threatened and endangered species coordinator, working with species like lynx, wolverine, and grizzly bears.

Daniel R. MacNulty is associate professor of wildlife ecology in the Department of Wildland Resources at Utah State University and was one of the first volunteers hired by the Yellowstone Wolf Project.

"How did wolves go from feared, hunted and decimated to a protected part of Yellowstone National Park's ecosystem? Yellowstone Wolves tells the fascinating story. . . . It's a comprehensive look at what happened when wolves were driven out of Yellowstone, and how nature is recovering now that they're back. . . . Part scientific tome, part rallying cry against humans' impulse to interfere with the natural world, Yellowstone Wolves is a powerful testament to what happens when 'people unite to give Mother Nature a chance,' as Jane Goodall puts it in her foreword to the book."
— Erin Blakemore

"Reintroducing the wolf to Yellowstone is arguably the world’s greatest wildlife experiment. The wolves’ progress has been documented meticulously by a team of hiking, driving and flying biologists and passionate volunteers—so much so that no wolf study comes close to yielding its abundance of information. The research generated has been distilled into a new book, Yellowstone Wolves, assembled by three of the biologists who studied the wolves’ return."
— New York Times

"Twenty-five years ago, the authors reintroduced wolves to Yellowstone National Park in Wyoming—the first deliberate return of an apex carnivore to a big ecosystem. Here, they relate what they’ve learnt of the animals’ predation, mating, play, genetics, disease and more, and their impact on other species and the landscape. Also detailed are the fraught history, politics and implications of rewilding. Glorious pictures bear witness to fragile gains. US President Donald Trump’s silver-anniversary gift? Rolling back protections on the wolves."
— Nature

"An intimate look at these wild canines and their ways. Humans have always felt more about wolves than we’ve actually known about them. Their emotions seem similar to our own, but they inspire dark fairy tales and anger among some livestock owners. By 1960, the wild canines were nearly extinct in the lower forty-eight, but in 1995, scientists plucked forty-one wolves from Canada and Montana and released them into the wilds of Yellowstone National Park. Since then they’ve thrived, splitting into myriad packs and offering researchers an unparalleled opportunity to witness their secrets. Now, twenty-five years of intensive research has been distilled into a fascinating new book, Yellowstone Wolves."
— American Way

"A gathering of scientific essays on the natural history of the reintroduced wolf population in Yellowstone National Park. Wolves were long a key predator in the Greater Yellowstone Ecosystem before they were extirpated. In 1995, they were reintroduced in what the editors characterize as 'a change of heart.' That change of heart is 'the single most important fact of wolf recovery everywhere.' . . . A welcome contribution to the conservation-biology literature on wolves."
— Kirkus Reviews

"This year marks the twenty-fifth anniversary of one of the largest and most successful conservation efforts in modern history: the reintroduction of wolves into Yellowstone National Park. This gorgeous book explains why wolves were eradicated from the park when it opened nearly seventy years ago, and how their reintroduction fundamentally changed the park’s ecosystems for the better. Edited by the people responsible for studying and managing the wolf reintroduction project—and with a forward by Jane Goodall—Yellowstone Wolves is a must-read for anyone interested in wildlife or conservation. The text is accompanied by stunning, full-color photographs and an online documentary by Bob Landis, perhaps best known for his work with National Geographic."
— Amy Brady

"Rich with photographs, charts, and maps, this volume provides a wealth of information for those studying the project, ecology, rewilding, and wolves in general, and it also brings the complex workings of the natural world of Yellowstone into clear focus...A comprehensive resource well-suited for natural science collections."
— Booklist

"The most complete book of which I am aware of all aspects of the behavior of majestic grey wolves. . . . The collection of essays, by a who's who of wolf researchers, is encyclopedic. It fully chronicles the epic journey of Yellowstone's wolves and the devoted researchers who have studied them there and in many other locations and is a must-read."
— Marc Bekoff

"An informative, evocative compendium celebrating the famed predators. Wolf. The mere word evokes images that range from a mystical creature representing the genuine awe of the wild to a demon hell-bent on destroying livestock and livelihoods. The truth, according to Yellowstone Wolves, is one that science and reason—not myth—should discern. The past twenty-five years of studying the animal after a Herculean and successful reintroduction of wolves to Yellowstone provide bounties of both."
— Christopher Lancette

“I had high expectations for this book and I wondered how it could ever be possible to cover and summarize the complexity of the project in a single book. Well, this book exceeded all my expectations and I strongly recommend it as one of the most important books on wolf biology ever written, not only for its content but also as superb example of an elegant and effective way of communicating science.”
— Luigi Boitani

"The huge volume of information presented in this book, plus illustrations, diagrams, and an extensive bibliography, underpin its significance to ecological research as do the many contributors; several guest essays add useful overviews. It is a fitting tribute to the 100 years plus of research pre and post wolf reintroduction, and a sound basis for future studies."
— The Biologist

"This handsome book may be coffee-table in size, but it is thoroughly scholarly in content. . . . Its coeditors could not represent greater specific expertise in the subject. . . . This splendid book is a major contribution to this vital, continuing debate."
— Geography Realm

"The combination of academic content, excellent photography, guest essays, and an online bonus documentary with interviews make this the go-to reference work for anyone wanting to go beyond the headlines on this reintroduction project. . . . By reintroducing wolves, scientists have had the unique opportunity to study the complexities of living, breathing ecosystems. Written by the very people who spent decades in the field doing the research, Yellowstone Wolves is a formidable achievement that presents a wide range of scientific topics in a well-organized, readable, and beautifully illustrated book."
— Leon Vlieger

“Yellowstone Wolves summarizes over two decades of hard work, involving dozens of dedicated scientists and advocates, to bring these wolves back to Yellowstone. . . . Their voices are skillfully combined to tell the many-faceted narratives in this marvelous book. . . . The overall success of this long-term effort provides information that will be of inestimable value to other restoration projects, sharing methods that can help wolves and humans coexist in a changing world and an example of what can happen if people unite to give Mother Nature a chance.”
— Jane Goodall, from the foreword

“Smith and his colleagues have graced us with the most comprehensive and elegant book ever written about the Yellowstone wolves. They take us deep into the human dimensions of wolf recovery while also giving us exceptional insights about social behavior not only for wolves, but for animal societies in general.”
— Mark W. Moffett, author of "The Human Swarm: How Our Societies Arise, Thrive, and Fall"

“I can’t praise this book enough. From the foreword by Jane Goodall to David Mech at the end, to all the now nearly lifetime work of researchers dedicated to this grand ecological experiment, important conservation effort, and inspirational project, Yellowstone Wolves is a model of success that will not only endure, but grow and sprout hope and inspiration globally. Bravo!”
— Bernd Heinrich, author of "Mind of the Raven," "The Homing Instinct," and "White Feathers"

“Wolves are surrounded by conflict and controversy, the substance of which has been dimmed by a veil of scientific uncertainty. Yellowstone Wolves is a readable and authoritative account about this iconic species and magical place, written by the scientists, managers, and conservationists who did the work. Read this book and learn what these on-the-ground professionals really know and think about wolves in the Yellowstone ecosystem.”
— James A. Estes, author of "Serendipity: An Ecologist’s Quest to Understand Nature"

“I consider the restoration of the gray wolf into the northwestern United States to be the single most important event in the past fifty years of wildlife conservation and management. This volume will serve as a major reference for years as it covers the key social/ecological/behavioral/management issues related to the wolf in Yellowstone National Park. Virtually all of the principal individuals who have been involved in wolf investigations and management across the continent have contributed.”
— James M. Peek, professor emeritus, Department of Fish and Wildlife Sciences, University of Idaho

“Very informative. Every reader of this book will learn something new and interesting about wolves, their ecology, or how they compare to other species in the animal world. It will be a great resource, sought out as the de facto authority on wolf knowledge and discovery for Yellowstone most certainly, but also on how the knowledge gained lends itself to understanding wolves elsewhere. Compelling.”
— Dean Cluff, Department of Environment and Natural Resources, Government of the Northwest Territories, Canada

“Yellowstone Wolves is a Herculean attempt to synthesize research on Yellowstone National Park subsequent to wolf recovery. It is likely to be touted as the definitive work on the subject for years. This is a necessary, wonderful book.”
— Mark Boyce, Department of Biological Sciences, University of Alberta, Canada