Hawking Incorporated: Stephen Hawking and the Anthropology of the Knowing Subject (Paperback) 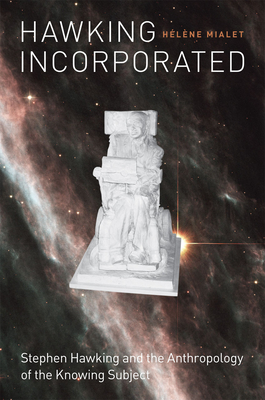 These days, the idea of the cyborg is less the stuff of science fiction and more a reality, as we are all, in one way or another, constantly connected, extended, wired, and dispersed in and through technology. One wonders where the individual, the person, the human, and the body are—or, alternatively, where they stop. These are the kinds of questions Hélène Mialet explores in this fascinating volume, as she focuses on a man who is permanently attached to assemblages of machines, devices, and collectivities of people: Stephen Hawking.

Drawing on an extensive and in-depth series of interviews with Hawking, his assistants and colleagues, physicists, engineers, writers, journalists, archivists, and artists, Mialet reconstructs the human, material, and machine-based networks that enable Hawking to live and work. She reveals how Hawking—who is often portrayed as the most singular, individual, rational, and bodiless of all—is in fact not only incorporated, materialized, and distributed in a complex nexus of machines and human beings like everyone else, but even more so. Each chapter focuses on a description of the functioning and coordination of different elements or media that create his presence, agency, identity, and competencies. Attentive to Hawking’s daily activities, including his lecturing and scientific writing, Mialet’s ethnographic analysis powerfully reassesses the notion of scientific genius and its associations with human singularity. This book will fascinate anyone interested in Stephen Hawking or an extraordinary life in science.

Hélène Mialet has held positions at Cornell, Harvard, and Oxford Universities, and currently lives and teaches in Berkeley, California. She is the author of L’Entreprise Créatrice, an ethnographic study of practices and processes of invention in an applied research laboratory in a multinational oil company. L’Entreprise Créatrice was a finalist for the Prix ADVANCIA for the best book published in French on entrepreneurship and innovation in 2008.

“First things first: Hawking Incorporated: Stephen Hawking and the Anthropology of the Knowing Subject is a masterful, inspiring book. Rather than producing a biography of Hawking, which this is decidedly not, Hélène Mialet’s book encourages us to question the very possibility of knowing who Hawking is without taking away the agency of the man himself, ultimately helping readers reconsider how we think about individuality, embodiment, and personhood in extremely productive ways. . . . Inspired by Actor-Network Theory but pushing it into new territory, Mialet’s study uses a thick description of Hawking’s ‘extended body’ to allow us a glimpse into the formation, movement, and circulation of identity in general, in the sciences and potentially well beyond. What does it mean to say ‘he thinks’? What’s the difference between dealing with texts and people? How do we define what is ‘original’ and how does that translate into the archive? Mialet’s work explores these and other questions in a series of ethnographic accounts and stories that are both fascinating to read and extremely helpful to think with.”
— Carla Nappi

"Mialet doesn’t ask what the famous scientist has taught us about cosmology. She asks what his life and career can teach us about scientific thinking in general—and about ordinary thinking too, for that matter. There is no doubt that Hawking is doubly exceptional, both in his mind and his body. The brilliant gambit of Mialet’s book is to explore this exceptionalism in order to reveal how scientific knowledge is made under far more ordinary circumstances."
— Ken Alder

“For Hélène Mialet, what we know is not Hawking but a construct she calls ‘HAWKING,’ which is sustained by an extended network of nurses, postgraduate assistants, students and other ancillaries, further institutional support, plus indispensable media assistance. In this rather thorough exploration, she gives us a thick description of how this all works, interwoven with much discussion of distributed identities and personhood in performance.”
— Jon Turney

“Hawking Incorporated will draw readers because of the extraordinary fame of its subject. However, it is most valuable because its case study identifies exaggerated but important features of ordinary science in practice.”
— Jon Agar

“He is a household name, and not just in scientific circles. As the world’s most famous living scientist, Stephen Hawking needs no introduction—whether appearing on late night chat shows or an episode of The Simpsons. But why? In Hawking Incorporated, historian and philosopher of science Hélène Mialet sets out to answer this question, and in the process comes to some interesting conclusions about the way we perceive science and scientists.”
— New Scientist

“Hawking Incorporated: Stephen Hawking and the Anthropology of the Knowing Subject by Hélène Mialet is a book that deserves a spot on every Transhumanist’s virtual bookshelf. . . . [A] must read.”
— Peter Rothman

“From a disability studies perspective, Hawking Incorporated serves as a superb case study for examining the ordinary practices that maintain disability as an undertheorized phenomenon. Disability, depicted by Mialet as a forceful provocation, puts the reader on the path to witness how various competencies are enabled by an able-ist network of power and knowledge. Moreover, this book is an excellent addition to science and technology studies; anthropology of the knowing subject; sociology of work; and, of course, a must-read for those interested in thinking critically about Stephen Hawking.”
— Tanya Titchkosky, University of Toronto

“Hawking Incorporated, while very much a work of anthropology based in the present, sits at the intersection of some of the most pressing questions for historians of science. To pose just a few: what is the relationship between individual and collective scientific activity? How do materials and machines matter in theoretical sciences? How is a subject constituted in an archive? How do private and public images of science shape scientific knowledge and practice and vice versa? Each question turns on Mialet’s presiding interest in just who and what make up the knowing subject, a figure she unpacks in ways that can challenge and enrich many historians’ work.”
— Michael J. Barany, Princeton University

“The book is written engagingly and may perhaps attract readers to the remarkable literature on the social and cultural workings of science that anthropologists, sociologists, historians, and philosophers have produced over the past four decades or so.”
— American Ethnologist

“Hawking Incorporated offers a new analysis of the ways in which the scientist Stephen Hawking’s persona is produced and used in an astonishingly wide range of spheres. Using materials from interviews, film and audio records, correspondence and informal documents, Hélène Mialet offers nothing less than a new anthropology of the contemporary scientist. This is a story with a fascinating cast: assistants, students, secretaries, archivists, physicians, engineers, journalists, and filmmakers all figure as key participants in the enormous work of sustaining and distributing Hawking’s projects. Mialet’s tactful and astute inquiry addresses the intimate details of the modern scientific world: its artful use of ingenious software, computational diagrams, and calculating aids; its ceremonial system of lectures and conferences; its career structure of disciplinary training and public mastery. The book will be of inestimable value both as a highly original biography of a fascinating intellectual presence and a broad study of one of the most important themes in the culture of modern sciences.”
— Simon Schaffer, University of Cambridge

“Hélène Mialet has offered a brilliant and provocative book, taking the example of Stephen Hawking to probe the contemporary articulation of ‘man.’ What we discover is the anthropos radically rethought as an assemblage of body, machine, media event and image, object, and industrial effect. Indeed, the human body turns out to be a series of interrelated connections, and this book persuades us to rethink our most basic ideas of human form and the tasks of science itself.”
— Judith Butler, University of California, Berkeley

“On a terribly risky topic, Hélène Mialet manages with a delicate and caring touch to approach one of the most vexing questions of science studies: how to give a concrete description of the material network able to generate abstraction? By connecting disability studies, distributed cognition, and the ethnography of formalism, she also manages to write a moving portrait of an embodied mind at work.”
— Bruno Latour, Sciences Po Paris

“Hawking Incorporated provides a social anatomy of how Stephen Hawking—as a physicist, person, and cyborgian collective—lives and breathes in human space-time, even as his theories reach toward a cosmic elsewhere. Hélène Mialet takes the reader on an anthropological odyssey through the worlds of those assistants, machines, students, and TV documentary teams that have helped to conjure Hawking as the singular figure he has become. When Mialet finally meets Hawking in person, the results are riveting and revelatory.”