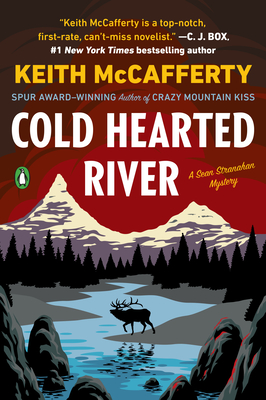 This is book number 6 in the A Sean Stranahan Mystery series.

In the sixth novel in the acclaimed Sean Stranahan mystery series, Montana's favorite detective finds himself on the trail of Ernest Hemingway's missing steamer trunk.

When a woman goes missing in a spring snowstorm and is found dead in a bear's den, Sheriff Martha Ettinger reunites with her once-again lover Sean Stranahan to investigate. In a pannier of the dead woman's horse, they find a wallet of old trout flies, the leather engraved with the initials EH. Only a few days before, Patrick Willoughby, the president of the Madison River Liars and Fly Tiers Club, had been approached by a man selling fishing gear that he claimed once belonged to Ernest Hemingway. A coincidence? Sean doesn't think so, and he soon finds himself on the trail of a stolen trunk rumored to contain not only the famous writer's valuable fly fishing gear but priceless pages of unpublished work.

The investigation will take Sean through extraordinary chapters in Hemingway's life. Inspired by a true story, Cold Hearted River is a thrilling adventure, moving from Montana to Michigan, where a woman grapples with the secrets in her heart, to a cabin in Wyoming under the Froze To Death Plateau, and finally to the ruins in Havana, where an old man struggles to complete his life's mission one true sentence at a time.

Keith McCafferty is the survival and outdoor skills editor of Field & Stream and the author of the Sean Stranahan mystery series, which includes The Royal Wulff Murders, The Gray Ghost Murders, Dead Man’s Fancy, Crazy Mountain Kiss, which won the 2016 Spur Award for Best Western Contemporary Novel, and Buffalo Jump Blues. Winner of the Traver Award for angling literature, he is a two-time National Magazine Awards finalist. He lives with his wife in Bozeman, Montana.

“The sixth novel in author Keith McCafferty's outstanding Sean Stranahan Mystery Series, Cold Hearted River is another compelling read from beginning to end that will prove be an enduringly popular addition to any community library Mystery/Suspense collections. A 'must' for the personal reading lists of dedicated mystery buffs in general, and Keith McCafferty fans in particular.”—Midwest Book Review.com

“Set along our own Madison River, images of fingers floating in tequila jars and cowboys surviving the cold in horse carcasses will fill the silence of your fishing meditation for weeks.”—Outside Bozeman

“When a book begins with a harrowing struggle for survival in the Montana mountains and uses as its MacGuffin a lost trunk of Ernest Hemingway’s fishing tackle (with the tantalizing possibility of lost manuscripts tucked inside), you know you’re not in for a run-of-the-mill mystery . . . McCafferty’s skill at creating memorable characters has even the walk-ons warming to the spotlight...bittersweet."—Booklist

“An exciting adventure set against some of the West’s most stunning landscapes. Cleverly interwoven with the true story of Hemingway’s lost trunk, it goes far to elucidate the mystique of fly-fishing.”—Kirkus

“McCafferty’s wryly bantering characters are irresistible, his humor tangy, and his lyricism potent as he matches escalating action with intriguing disquisition…A sharply ironic and suspenseful tale surreptitiously veined with profound insights into love, friendship, cultural collisions, and dire conflicts over wildlife and land, the sacred and the profitable.”—Booklist (starred)

“Explosive, gripping and not to be missed.  Keith McCafferty gets the West just right...McCafferty is an impressive writer.”—Margaret Coel, New York Times bestselling author of The Man Who Fell From the Sky and Winter’s Child

“Keith McCafferty understands that there is much more to a riveting mystery than what is commonly found in the typical whodunit. He also knows that a rousing good tale can often shine a light on important matters that deserve our attention...He writes with heart and command of the story that sparkles on every page.”—Michael McGarrity, New York Times bestselling author of Backlands

“McCafferty nails the delicate balance between humor and heft in a genuine way.”
—P.J. Tracy, New York Times bestselling author of Off the Grid