The Ocean of Life: The Fate of Man and the Sea (Paperback) 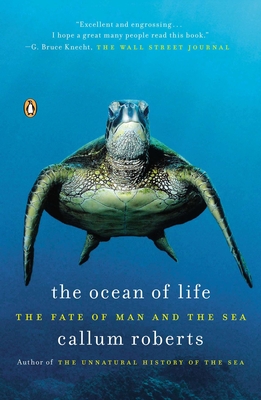 A Silent Spring for oceans by “the Rachel Carson of the fish world” (The New York Times)  who appeared on the Imax film Wild Ocean and provided the scientific basis for the creation of the first high seas marine protected areas. For fans of Carl Safina and Elizabeth Kolbert.

“Immensely entertaining, although it chronicles a tragedy… No account of the cataclysm is more engaging.”
—Mark Kurlansky, The Washington Post

The sea feeds and sustains us, but everywhere we look marine life is under threat, from Caribbean reefs to arctic fisheries to the deepest regions of the sea. In this passionate paean to the sea and its creatures one of the world’s foremost marine conservation biologists tells the story of man and the sea, from the earliest traces of life on earth to the oceans as we know them today. He considers the impact of fishing and ocean acidification, rising tides and warming seas, plastics and shifting currents, and reveals what we must do now to preserve our precious oceans. The struggles of Turtles, Dolphins, Whales and Tuna are relatively well known, but few people appreciate just how much our seas have changed in the last fifty years and how many species are now under acute stress. At once passionate and persuasive, The Ocean of Life will appeal to readers of Four Fish and The Sixth Extinction –to those who care about environmental sustainability, and to anyone who loves the sea and its creatures.

Callum Roberts is the author of The Unnatural History of the Sea, a Washington Post Book of the Year and winner of the Rachel Carson Environment Book Award. A professor of marine conservation at the University of York, he consulted on the Blue Planet series and the IMAX film The Wild Ocean and is a frequent keynote speaker at environmental conferences (including Mission Blue, TED and the Skoll foundation). He advised and was featured in The End of the Line, a documentary on the global fishing crisis and appeared in the National Geographic documentary America Before Columbus. He is on the board of Seaweb and provided the scientific basis for the creation of the world’s first high seas protected network.

“One of the world’s most prominent and articulate marine scientists, Callum Roberts gives us an updated, comprehensive, and engaging account of the ongoing crisis beneath the waves, and how we humans can turn the situation around. Despite the frightening litany of problems facing the seas, Roberts is optimistic that we can and will mend our ways so that marine resources will be there to help support planet Earth.”
—Christian Science Monitor

“Told with both scientific accuracy and narrative skill. . . . I know of no other volume that treats such divergent ocean issues as overfishing, decreasing pH, plastic pollution and biogeographic shifts with this much accuracy and acumen. Each chapter is edged with fascinating details about the life of the sea. At the heart of this book is a deep love of the ocean and a profound concern for its viability as a resource for us all.”
—Stephen Palumbi, Nature

“Roberts is that precious pearl: a practicing scientist who not only knows his field inside out, but also understands how to write compelling, persuasive non-fiction. . . . To use the vernacular of his book, he has trawled and plundered these experiences to craft the nearest thing we are ever likely to get to an all-encompassing manifesto for sustainable marine management.”
—The Guardian

“Callum Roberts has done it again. From showing us the past with the wisdom of a Dickens character in his earlier book, he now leads us toward the future in The Ocean of Life. It’s a book so fine, I wish I’d written it!”
—Carl Safina, author of Song for the Blue Ocean

“The urgency of Callum Roberts' message - that we have very little time to save the oceanic environment on which our existence depends - is in no way undermined by the entertaining and brilliantly-written nature of his writing. This is simply a fascinating book, taking in everything from the elemental formations of the oceans to the denizens that inhabit them; from minute plankton to the great whales - and everything that threatens them, and us. Roberts imparts his vast knowledge with a consummate talent for colorful narrative and devastating facts. His book will be required reading for anyone who cares about the oceans—not least because, as well as underlining the scale of the problems, he offers us the hope of real solutions.”
—Philip Hoare, author of Leviathan, or The Whale

“The enormity of the sea’s troubles, and their implications for mankind, are mind-boggling. Yet it is remarkable how little this is recognised. . . . There is a dearth of good and comprehensive books on a subject that can seem too complicated and depressing for any single tome. Callum Roberts, a conservation biologist, has now provided one.”
—The Economist

“The eminent marine biologist Callum Roberts weaves his personal passion for the oceans through the enchanting story of the evolution of the planet’s water… Blending science and observation, he issues a compelling call to move from the catastrophic path we are on. Like Rachel Carson’s seminal book Silent Spring, which catalyzed the environmental movement, The Ocean of Life is eloquent and authoritative.
-- David Suzuki, host of “The Nature of Things”

“Those of us who worry about the future of our oceans could do a lot worse than take up this single refrain, "Listen to Callum Roberts!". Shouted in the ears of the world's leaders, it might just make a difference. Meanwhile we should all read Ocean of Life, a thrilling narrative of oceanic natural history and a vital call to action”
--Hugh Fearnley-Whittingstall, chef, broadcaster and author of The River Cottage Cookbook

“An engrossing survey of the relationship between man and the sea for readers living through the greatest environmental changes in 65 million years. . . . Roberts’s meditation will have readers gasping aloud with wonder, even as the sobering truth of humans’ profound interdependence with the sea provokes concern.”
—Publishers Weekly (starred review)

'For anyone who loves the sea, Ocean of Life is a wake-up call, an urgent alert' --Daily Mail
'At the heart of this book is a deep love of the ocean and a profound concern for its viability as a resource for us all'
--Nature

'An impressive history ... one of this book's strengths is the many solutions Roberts outlines.'
-- Financial Times