An Unlikely Spy: A Novel (Paperback) 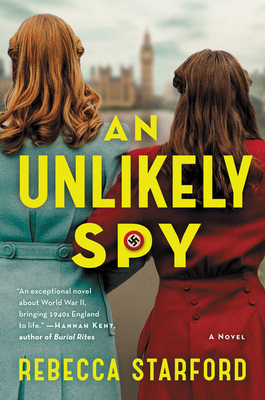 “A beguiling tale of espionage." -- Pam Jenoff, author of The Orphans Tale and The Lost Girls of Paris

A twisting, sophisticated World War II novel following a spy who goes undercover as a part of MI5—in chasing the secrets of others, how much will she lose of herself?

Evelyn Varley has always been ambitious and clever. As a girl, she earned a scholarship to a prestigious academy well above her parents’ means, gaining her a best friend from one of England’s wealthiest families. In 1939, with an Oxford degree in hand and war looming, Evelyn finds herself recruited into an elite MI5 counterintelligence unit.

A ruthless secret society seeks an alliance with Germany and, posing as a Nazi sympathizer, Evelyn must build a case to expose their treachery. But as she is drawn deeper into layers of duplicity—perhaps of her own making—some of those closest to her become embroiled in her investigation. With Evelyn’s loyalties placed under extraordinary pressure, she’ll face an impossible choice: save her country or the people who love her. Her decision echoes for years after the war, impacting everyone who thought they knew the real Evelyn Varley.

Beguiling and dark, An Unlikely Spy is a fascinating story of deception and sacrifice, based on the history of real people within the British intelligence community.

Rebecca Starford is the publishing director and cofounder of Kill Your Darlings. She has a PhD in Creative Writing from the University of Queensland and lives in Brisbane, Australia.

"Readers will travel breathlessly along with Evelyn as she navigates the treacherous waters of lifelong allegiances and new alliances, foreign dangers and secrets uncovered much closer to home.  Starford has penned both a beguiling tale of espionage and a noteworthy commentary on torn loyalties and the unthinkable choices of war." — Pam Jenoff, author of THE ORPHAN'S TALE and THE LOST GIRLS OF PARIS

“A well-crafted spy novel examines the perils of espionage’s foundation in personal relationships. . . . The intriguing story of a young woman’s espionage career during World War II weaves in a critique of the British class system. . . . The book is rich with historical details, right down to clothing styles and furnishings. . . .The novel’s depiction of Evelyn’s career is exciting, but it also suggests the human cost: No matter how skilled her performances, to those above her in the social hierarchy, she’s expendable.” — Kirkus Reviews

“Prepare to fall in awe with Evelyn Varley, the titular unexpected MI5 agent in this fast-paced thriller filled with more twists than a bag of pretzels. Set during World War II, memoirist Starford's fiction debut is a must-read for historical fiction buffs.” — E! Online

“A fast paced tale with plenty of plot twists and enough complexity to place it somewhere between a historical genre novel and a literary thriller.” — The Guardian

“A beguiling and compelling tale of an otherwise ordinary women, an unlikely spy caught between the personal and the political in the machine of war.”  — The Age (Australia)

“Class and ideologies collide in Starford’s consummate debut, a clever combination of home front drama and espionage thriller….The author does an excellent job of recreating London before, during, and after the war, and in Evelyn has created a complex heroine whose sense of duty gets her in way over her head. With suspense worthy of Hitchcock and a moral reckoning straight out of Le Carré or Graham Greene, this is a winner." — Publishers Weekly

“[A] subtle yet moving story of personal and professional camouflage, of hidden selves fearing the light.” — Booklist

“An Unlikely Spy gripped me to the end: I devoured it. Rebecca Starford has created an exceptional novel about World War II, bringing 1940s England to life in formidable, compelling detail and thrusting the reader into a world of wartime spies, betrayal and surprising revelation. What a rare treat to find a novel that offers both white-knuckled suspense and evocative, beautiful prose. I loved it.”  — Hannah Kent, author of Burial Rites

“Rebecca Starford seems to be the inheritor of the cool, narrative elegance of Graham Greene and John le Carré. Her building of the tale to reach the critical moral apogee of this book seems effortless, and she has found a fascinating and unexpected World War II corner of espionage and intelligence to exploit for a plot that runs like milk and honey.”    — Thomas Keneally, author of Schindler’s List

“A poignantly rendered narrative map of one woman's journey from misfit to spy—and a thought-provoking examination of the gently human desires that lay the groundwork for pernicious extremism. Rebecca Starford has given us a rousing reminder of the power of our choices.” — Juliet Grames, author of The Seven or Eight Deaths of Stella Fortuna