The Cabin at the End of the World: A Novel (Paperback) 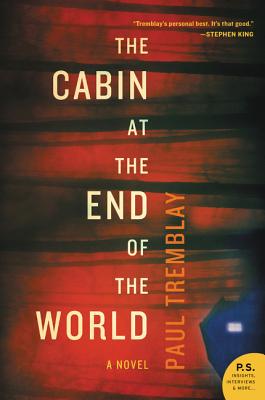 “Wen and her dads are taking a break from everything by visiting a remote cabin for vacation. Wen is studying grasshoppers in their yard when a man comes up and warns her that she and her dads are going to have to make a decision. And that’s about all I can tell you without spoiling the story. This book was so creepy, in a very good way. I’d classify this as horror, but very realistic.”
— Jennifer Jones, Bookmiser, Roswell, GA

Seven-year-old Wen and her parents, Eric and Andrew, are vacationing at a remote cabin on a quiet New Hampshire lake. Their closest neighbors are more than two miles in either direction along a rutted dirt road.

One afternoon, as Wen catches grasshoppers in the front yard, a stranger unexpectedly appears in the driveway. Leonard is the largest man Wen has ever seen, but he is young, friendly, and he wins her over almost instantly. Leonard and Wen talk and play until Leonard abruptly apologizes and tells Wen, “None of what’s going to happen is your fault.” Three more strangers then arrive at the cabin carrying unidentifiable, menacing objects. As Wen sprints inside to warn her parents, Leonard calls out: “Your dads won’t want to let us in, Wen. But they have to. We need your help to save the world.”

Thus begins an unbearably tense, gripping tale of paranoia, sacrifice, apocalypse, and survival that escalates to a shattering conclusion, one in which the fate of a loving family and quite possibly all of humanity are entwined. The Cabin at the End of the World is a masterpiece of terror and suspense from the fantastically fertile imagination of Paul Tremblay.

Paul Tremblay has won the Bram Stoker, British Fantasy, and Massachusetts Book awards and is the author of Growing Things, The Cabin at the End of the World, Disappearance at Devil’s Rock, A Head Full of Ghosts, and the crime novels The Little Sleep and No Sleep Till Wonderland. His essays and short fiction have appeared in the Los Angeles Times, Entertainment Weekly online, and numerous year’s-best anthologies. He has a master’s degree in mathematics and lives outside Boston with his family.

“A tremendous book―thought-provoking and terrifying, with tension that winds up like a chain. The Cabin at the End of the World is Tremblay’s personal best. It’s that good.” — Stephen King

“Read Paul Tremblay’s new novel, The Cabin at the End of the World, and you might not sleep for a week. Longer. It will shape your nightmares for months—that’s pretty much guaranteed. That’s what it’s built for. And there’s a very, very good chance you’ll never get it out of your head again.” — NPR

“The Cabin at the End of the World is a clinic in suspense, a story that opens with high-wire tension and never lets up from there. The blend of human horror and human heart is superb. Paul Tremblay is rapidly becoming one of my favorite suspense writers.” — Michael Koryta, New York Times bestselling author

“The apocalypse begins with a home invasion in this tripwire-taut horror thriller. . . .[Tremblay’s] profoundly unsettling novel invites readers to ask themselves whether, when faced with the unbelievable, they would do the unthinkable to prevent it.” — Publishers Weekly (starred review)

“Think The Desperate Hours meets 10 Cloverfield Lane, but way, way stranger.  With The Cabin at the End of the World, Paul Tremblay gives us a gloriously claustrophobic and gory tale of faith and paranoia.  Signs and wonders and homemade battle-axes, oh my!” — Stewart O’Nan, author of The Speed Queen and A Prayer for the Dying

“The Cabin at the End of the World is a thriller that grapples with the timely and the timeless. I tore through it in record time. I just couldn’t wait to see where Tremblay was going to take me next.” — Victor LaValle, author of The Changeling

“A blinding tale of survival and sacrifice that matches the power of belief with man’s potential for unbridled violence.” — Kirkus Reviews

“[A novel] about the clash of rational and irrational, hatred and violence, prophecies and religion gone mad, and perhaps hope. The Cabin at the End of the World is a terrific, disturbing, desperate novel, one that profoundly reflects the current political climate of North America and our ambiguous times.” — Mariana Enriquez, author of Things We Lost in the Fire

“Tremblay once again demonstrates his talent for terrifying readers. Offering a terrible situation with no good outcome, this is the author at his best. Highly recommended for Tremblay’s fans and those who relish end-of-the-world scenarios.” — Library Journal (starred review)

“Paul Tremblay is the real deal! The Cabin at the End of the World is a heart-pounding, edge of your seat thriller that will leave you with one simple question: what would you do?” — J.D. Barker, internationally bestselling author of Forsaken and The Fourth Monkey

“Tremblay captures the intense emotional struggle. . . of Wen, Andrew, and Eric, while dread and terror permeate every sentence. This is a novel with the heart and tone of The Road, by Cormac McCarthy, but will also appeal to fans of Ruth Ware, Josh Malerman, and Joe Hill.” — Booklist (starred review)

“Paul Tremblay loads emotion and tension into every paragraph on every page of The Cabin at the End of the World. It is a dream come true, a heartfelt, emotionally charged journey into our worst nightmares. — Caroline Kepnes, author of You and Providence

“Tremblay skilfully keeps his readers guessing about the reality of Leonard’s ominous warning as he lets his horrifying scenario play out.” — The Guardian

“Equal parts gripping, horrifying, and mesmerizing. . . . The Cabin at the End of the World succeeds in part because it trades in frights rooted (or not) in totally unprovable motivation.” — GQ