The Art of Joinery, Revised Edition

“The Art of Joinery” was the first book published by Lost Art Press. It was out of print and unavailable for several years until we released this revised edition in the fall of 2013. Here is what the revised edition contains:

1. The lightly edited text of Joseph Moxon’s landmark work on joinery – the first English-language text on the topic. We took Moxon’s 17th-century verbiage and removed the long “s” characters, broke up his run-on sentences and added a few words here and there (in brackets) to help the modern reader digest the text more easily.

2. Modern commentary on every one of Moxon’s sections on tools and techniques by Christopher Schwarz. Chris has amplified the text with photos that demonstrate many of the processes that Moxon discusses, such as processing stock by hand and cutting mortise-and-tenon joints. And Chris has explained the historical context behind many of Moxon’s explanations, sometimes supporting his conclusions; sometimes taking issue with them. In this revised edition, Chris has expanded some of his commentary and revised some assessments based on new information.

3. Each section is published with the relevant illustrations embedded in the text. In the original edition, the plates were separate from the text. We have put them together to make it easier for you to read.

4. We have published the original plates in their entirety so you can see how the tools were arranged on the page.

5. We have included the complete and unedited original text from the 17th century. This text includes all the antiquated characters, inconsistent spellings, free-form italics and capital letters and run-on sentences. We have painstakingly reset the entire text in a 17th-century style typeface called “Fell.”

6. And we have added an appendix of select plates from André Félibien’s “Des principes de l'architecture, de la sculpture, de la peinture…“ (1676), which pre-dated Moxon’s work and is probably the source of many of Moxon’s drawings.

“The Art of Joinery, Revised Edition” is 168 pages and – like all Lost Art Press publications – printed and bound in the United States. The book is hardbound and covered with a dark-blue cloth. The interior of the book is notched and casebound for durability. The book has natural-colored endsheets and the book’s pages feature a rough exterior edge (sometimes called a "deckle" edge), like early books. 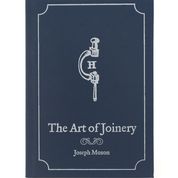