Most of the American furniture we celebrate as the pinnacle of design is overbearing, over-embellished and a monument to waste and excess.

These high styles of furniture took hold in North America in the 18th century and persist to this day as both cult objects for collectors and as rites of passage for artisans. These are precious pieces that are auctioned, collected, reproduced and written about in exhaustive detail.

Or, to put it a slightly different way, the people who could afford this furniture also owned mega-farms, factories and (sometimes) entire towns. This is not a knock on their wealth. But it is a simple way of asking a question that rarely gets asked among amateur makers: Why would you want to imitate the taste of your boss’s boss’s boss?

The new, expanded edition of “The Anarchist’s Design Book” is an exploration of furniture forms that have persisted outside of the high styles that dominate every museum exhibit, scholarly text and woodworking magazine of the last 200 years.

There are historic furniture forms out there that have been around for almost 1,000 years that don’t get written about much. They are simple to make. They have clean lines. And they can be shockingly modern.

This book explores 18 of these forms  – a bed, dining tables, chairs, chests, desks, shelving, stools – and offers a deep exploration into the two construction techniques used to make these pieces that have been forgotten, neglected or rejected.

You can build an entire houseful of furniture using these two methods – what we call “staked” and ”boarded” furniture. They are shockingly simple for the beginner. They don’t require a lot of tools. And they produce objects that have endured centuries of hard use.

But this isn’t really a book of plans. “The Anarchist’s Design Book” shows you the overarching patterns behind these 18 pieces. It gives you the road map for designing your own pieces. (Which is what we did before we had plans.)

The new expanded edition of “The Anarchist’s Design Book” has 656 pages (200 more than the first edition) that are sewn for long-term durability. The book is 8" x 10", casebound and sheathed in thick hardback boards that are covered in cotton cloth. This is the largest book Lost Art Press has published to date.

Like all Lost Art Press books, “The Anarchist’s Design Book” is produced and printed entirely in the United States.

Curious about what we mean by "anarchism?" Read this short FAQ. It's probably not what you think. 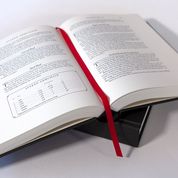